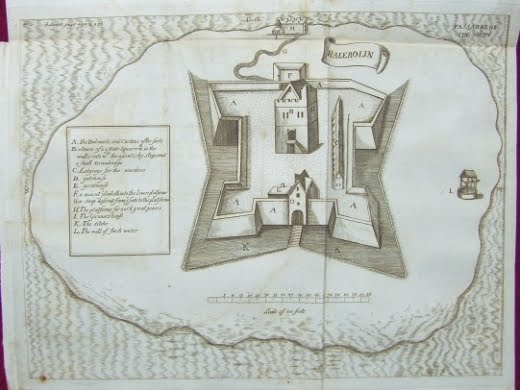 The island of Haulbowline in Cork Harbour lies just across the water from the town of Cobh.  Fortifications were built here in the early 1600's but in 1707 the Earl of Inchiquin of Rostellan, William o' Brien, took a lease on the island. His grandfather, Murrough O' Brien,  the first Earl of Inchiquin  had introduced sailing to Ireland during the 1660's at Rostellan - sailing the waters near East Ferry. It is likely that all the O' Briens sailed on these lovely waters now frequented by the dinghies and other boats from SailCork. We know for certain that the 4th Earl, also William was definitely involved in the " Water Club" in 1720 - but it is likely that the club existed on Halubowline before this date.

The military presence in Haulbowline diminished during the 1700's but this all changed with the establishment of a victualling yard there in 1805 by the British. Cove (now Cobh) was made the station of a Port Admiral. The Earl of Inchiquin's lease was terminated at this stage and the club moved across the water to Cove - to emerge as the Cork Yacht Club and eventually the Royal Cork Yacht Club - it had it's home there until it moved to Crosshaven in 1968.

A series of forts in Cobh, Spike and the headlands at the entrance to the Harbour were built. The beautiful stone " Naval Stores" were built by Mrs. Deane and 4.5 acres of land was reclaimed. Building continued and by 1822 the Royal Alexandra Yard was complete. Within 15 years it was put in mothballs and opened as a relief depot during the Great Famine in 1847. The Crimean War brought the yard back into use in 1853 and plans began to have it supplemented with a full dockyard.The project finally began in 1865 but was not completed until 1887 and not in full operation until 1894. The dockyard continued to expand and a steam railway was built around the island with 300-400 men employed. Naval vessels were moored in Haulbowline and opposite Queenstown (Cobh)  as well as Ringaskiddy where a training college was established. The presence of the Navy meant huge prosperity in Queenstown with houses being built in the town for naval ratings, officers and men working in the dockyard. It also was important that such a large number of skilled craftsmen were employed - they would pass these skills on to generations to come. These were also the glory days of the Royal Cork Yacht Club with the top yachts and competitors racing in and off Cork Harbour - operations were run from the beautiful Peter Salvin designed italianate clubhouse on the waterfront in Queenstown.

Work continued on expanding the facility and was completed by 1911.This included the "Naval Basin"  - an area of 5 acres which could be pumped out to work on ships. It also included a dry dock within this area - see picture.  During the first world war Queenstown was the Naval Headquarters for the Royal Navy for the area from Mull in Scotland to Ushant in France. Up to 4000 men worked in the dockyard as well as the thousands of sailors on ships based here. The dockyard facility was second to none and it was a really vibrant place in those days. After the war the forces dispersed and most of the workmen were laid off. It was transferred to the Iris government after the Treaty but the Admiralty continued to operate it on an agency basis. With the outbreak of the second World War the "Marine Service" (the predecessor of the Irish Naval service) set up a base in Haulbowline. A number of industries were spawned here including Marine Transport Services (ferries and workboats), Haulbowline Industries (ship-breaking), Cork Harbour Oil Wharfs (oil refining) and Irish Steel which expanded to employ a huge number until it was closed.

The Naval Service have expanded from a service which originally included sailing ships, trawlers and tugs to a fleet of MTBs on to a fleet of 3 corvettes to the modern Naval Service we know today. Next Saturday they play host to the yachtsmen of Cork Harbour for the annual visit. We will all be proud to be there and feel the history!

Race starts will begin at 13:55 with separate starts for Class 1, Class 2+3, Whitesail and J80. Startline in vicinity of Crosshaven - line and course announced on VHF 69. Notice of Race for Naval Race.